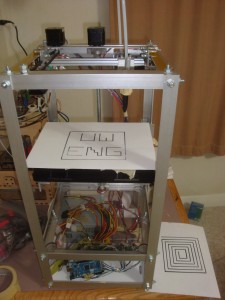 A 3D printer in layman’s terms takes a computer drawing of an object (for example something rendered in Solidworks for example), and produces a physical representation of the object by melting and depositing a thermoplastic layer by layer.

Inspired by the open source Reprap project, my friend David and I got together in the summer of 2010 to try and design and construct our own 3D printer. Because of the busy lives we both have (and the effects of co-op), progress has been slow. We are committed to finishing it off though however.

The mechanical systems of the printer are our own design and construction. The most important mechanical components are the cartesian stages (x,y,z) in which the printhead moves. I went through a couple of design iterations for the motion of the stages. The first design had the z stage rising on four separate threaded rods, connected together with a long timing belt (left image, with the four cylinders holding up the platform). Movement in the x and y axes was to be provided by using brass bushings and aluminum rod. This proved to be problematic because of the difficulty of securing bushings to a moving stage and the large amount of friction associated with the movement. 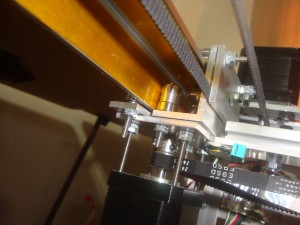 The second design iteration (central image) consisted of replacing the bushing and rod bearing with teflon and polycarbonate glides. This again was abandoned because of perceived problems with friction and construction difficulty. The final design consisted of using the frame of the machine as the bearing guides themselves, and crafting custom slides using ball bearings and larger aluminum angle (right image). This solved any friction issues, and also allowed for greater movement in the x-y direction. The z stage was also modified and became a cantilevered surface, rather than four distinct risers. This made the construction much more simple, and allowed the z stage to be driven directly by a stepper motor rather than through a timing belt. 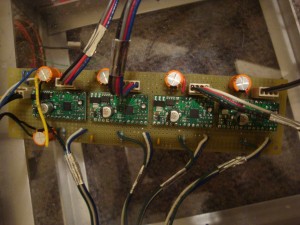 cs of the printer are also fairly simple at the moment. An Arduino Mega microcontroller hooked up to four stepper motor drivers (one for each stage, and one for the extruder mechanism). We’ve got a board dedicated for the plastic melting mechanism, but that hasn’t been finalized or hooked up yet. The next steps on the project are the creation of the hot end, and finally the software to make the machine start printing.

We’ve got a blogger blog going on that documents our (slow) progress on the machine. Click on heading of this page to check it out!