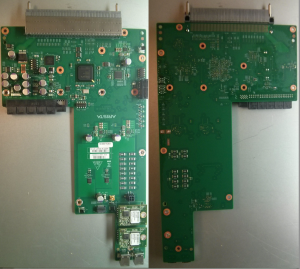 At Arista, I was a member of about 30 or so hardware engineers designing the circuit boards powering their network switches. Being an intern, I wasn’t able to design production boards that went to customers. However I was given the opportunity to design a test board (see picture on the right) for a switch controller board, which would be used in the factories to ensure the controller boards manufactured by Arista functioned correctly.

Being the sole designer of the board, I was able to take the design from beginning to end, including the following stages of the design:

I should note here that before the work term I had no experience working with DxDesigner, and minimal experience in Verilog or HDL coding. In addition to learning Verilog and using DxDesigner I also had the opportunity to evaluate a few CPU core power supplies for a different project -in particular for their response to high current loads and imbalanced phase currents.