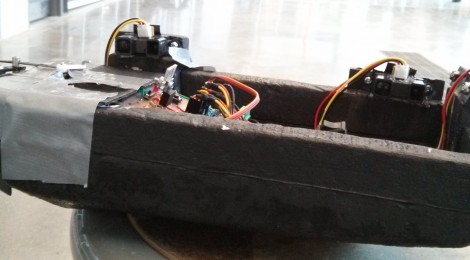 For our project design course in third year, my class was given the task of working in groups of five to design and build an autonomous boat that could navigate a rectangular pool of water. Being a competition, each boat’s performance was determined by measuring by it’s speed in the water with respect to it’s mass. In our boat design, my group used three IR distance sensors interfaced to an arduino microcontroller and a protoboard shield to detect the surroundings. Control was provided by using a proportional feedback system that controlled an RC boat rudder. As the lead mechanical designer and builder of the group, I spent a number of hours over the 3 week build period working with my team members to construct and optimize the shape and structure of our boat. We ran into a number of issues when testing and optimizing our boat design, including:

Thankfully our hard work and testing paid off on competition day, with my group completing a lap in 11.5 seconds and tying for 1st place out of the 22 competing boats (see the video below)!