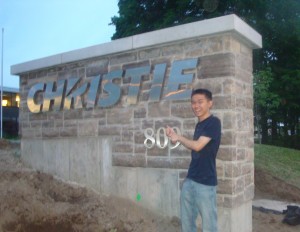 At Christie, I was part of the Entertainment Systems Business Unit (ESBU) -the department that designs digital projectors for use in movie theaters.

The electrical project consisted of the testing of placement and selection of bypass capacitors. Common decoupling/bypass methods of circuits on PCB’s use rules of thumbs or simulators in order to determine the number and value of capacitors to use. The tests I performed were to test the effectiveness of each decoupling rule of thumb, as well as the accuracy of a PCB decoupling excel based tool.  This project taught me a lot about concepts such as PCB mutual inductance, embedded capacitance, as well as the non-ideal frequency-dependent nature of capacitors. I also gained some hands on skills, like working with a Vector Network Analyzer (VNA) and how to surface mount solder small components (as small as 0201). 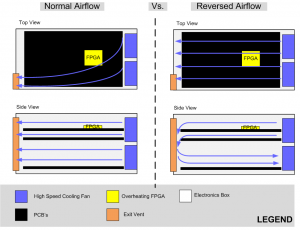 The mechanical project was the development of a method to improve the airflow and cooling of one of the projector model’s electronics. In particular, the cinema processing FPGA on one of the projector’s PCB’s was receiving insufficient airflow and was heating up to almost 90 degrees Celsius. This overheating affected nearly 2500 projectors in the field. I worked with an engineer to experiment a number of ways in order to improve this cooling, and came up with the idea to change the normally linear flow into a more circular flow (see left image). This simple change significantly improved the airflow of the FPGA and dropped its temperature by 30 degrees Celsius.