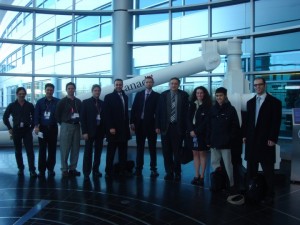 At MDA Space Missions, I was part of the Advanced Systems Engineering team, which develops vehicle concepts and for potential space exploration missions for the Canadian Space Agency and NASA.

In particular I worked on the development of a lunar manned rover concept, as well as a lunar lander offloader. For the lunar manned rover concept I was responsible for the concept and CAD modelling (in Unigraphics NX) of the Human Machine Interface, as well as helping to brainstorm ideas for the drivetrain. As a member of the team, I also got to help them present the design to senior managers and engineers at the Canadian Space Agency’s Headquarters in Montreal (see right image).

For the lunar lander offloader I helped in the concept development of robot that would be able to offload a manned lunar rover, while weighing under 500kg and fitting within a confined space. The tight space and weight requirements led to a hybrid forklift and crane concept that could transport both the 2 ton rover and itself off the lander and onto the lunar surface.

In addition to those two projects I also helped with the mission architecture planning of an orbital satellite servicing and refueling vehicle.